Stop Screwing Around and Get Organized 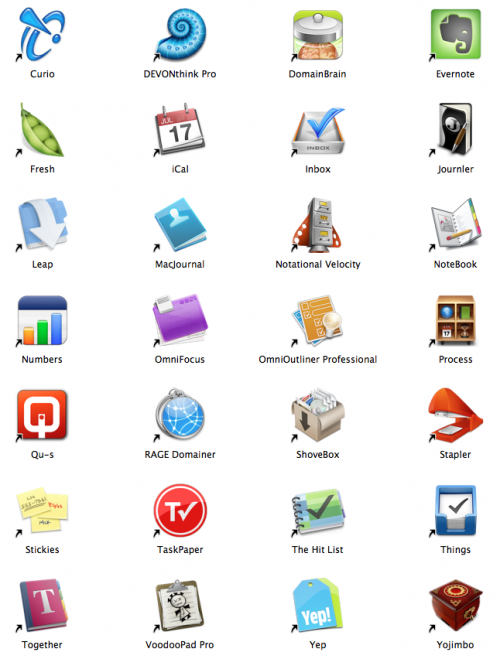 This is a tiny subset of the software I own. These applications all have one thing in common: I've attempted to use them to help organize my life.

Some of them are for organizing bits of information (like Yojimbo, VoodooPad, and Evernote). Others are for organizing tasks (like Things, OmniFocus, Inbox, The Hit List, and TaskPaper. Yes—I have a lot of these). Some sit somewhere in the middle, allowing organization of bits of information as well as tasks (like OmniOutliner, Process, and Notebook). Others are much more narrowly focused, attempting to keep just little bits of your life organized (like DomainBrain and Domainer, for managing information about your domain names). Some are for attempting to organize files (like Leap) or specific types of files (like Yep).

Some of them kind of defy classification. Curio is an app that can be squeezed into organizing almost anything, and DEVONthink is kind of in the same boat. Others, like Numbers, are apps I've attempted at some point to press into service for managing tasks, even though they aren't necessarily built for that.

I've also tried a variety of online solutions for task management. Backpack, Basecamp, Highrise, Remember The Milk, and others that I don't even remember anymore.

Some of these tools have been quite useful to me in the past. These were generally the tools for organizing bits of data, not so much the ones for organizing tasks. Task management is probably the biggest problem I have when it comes to organization. I've kind of settled on Evernote for this task at the moment, mainly because I can put stuff in it anywhere and it syncs flawlessly across my devices.

But task management is still a very difficult problem for me.

I was reading Organization is Annoying the other day, an article by a friend of mine. She mentions a few things that resonated with me, and here are the main takeaways I got from the article.

I completely understand the first point, and I think this point kind of makes the other point moot. I'm thinking primarily of task management here, and that seems to be the primary thrust of her article.

I get all excited when I see a new tool that is supposed to help me get organized. I buy it. I may use it for a bit, but it never really make it enough of a part of my life to actually get organized and stay that way.

The fact is that despite the lists of pros and cons between the various software packages, and even throwing pen and paper into the mix, it doesn't matter. The reason I'm disorganized has absolutely nothing to do with the tools that I use.

Yes, some software tools may work better with my style of thinking, but that's not really the issue.

Here's a list of apps out of the ones above that are very capable for managing tasks:

These are the best task management apps available on the Mac today. There is nothing better. You may argue about which is the best out of this bunch, but the fact remains that I have no less than five applications that are top notch for managing tasks.

I'll say it again: my problem has nothing to do with the tools that are available to me. So what is my problem with getting organized? I'm not completely sure, but I have some ideas.

###So I guess my advice to you and to myself is this:

Stop messing around with the tools and get organized already. Pick one, delete the others, and get going. If you think pen and paper will work better, use it. Don't second-guess yourself, just pick one and use it. When something new comes down the pike, ignore it.

In the next few days I'm going to decide if I'm sticking with OmniFocus or going back to Things. Then I'm going to stick with it. Whatever choice I make, I'm going to delete all the other ones and give it a go.